I ran the Giants Head Marathon, my first White Star Running event, yesterday. It was a well organised, friendly and inclusive race set in a stunning part of the world, rural Dorset. I’ll be going back to do another WSR race for sure.

[Superb, naughty bling for this race]

[Feeling relaxed and running steady at the start – 8 minute miling without realising it! Photo: Rob Hannam]

[Clearly not enjoying yet another hill in the early stages of the race. Photo: Rob Hannam] 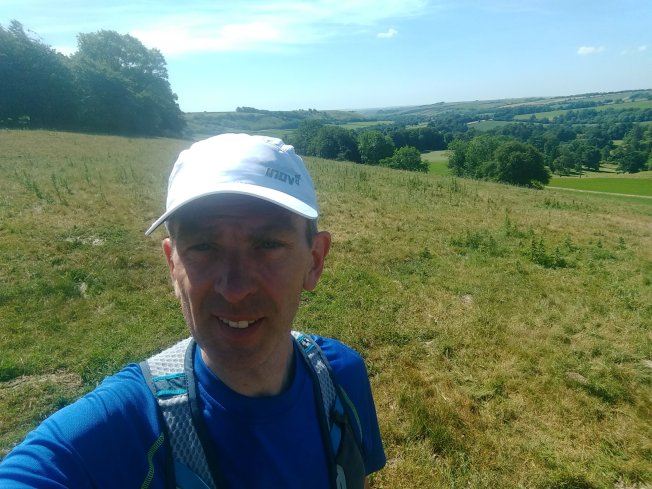 [Just before taking a wrong turn and getting lost, around halfway]

[This is the WSR sweeper, complete with broomstick! This lady does all their races as sweeper apparently. Excellent! Photo: Rob Hannam]

Things I learned (or was reminded of) in running this race 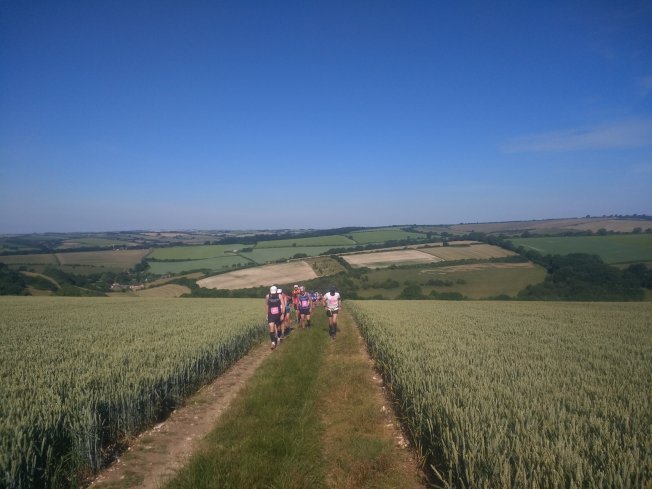 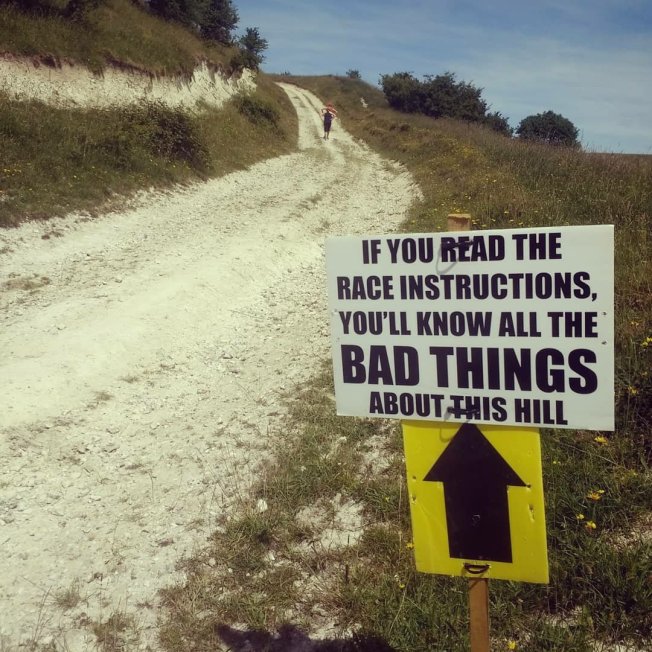 [Yep. It went on foeverrrrrr!]

There is no need to panic. One of my strengths over the last few years has been in climbing the uphills. I manage to hike with purpose and sometimes find myself overtaking people on the way up, even if they do then overtake me on the way down! I could definitely tell that I haven’t done much hill training this year when I was on the hills but this was a conscious decision to build fitness and consistency using the TrainAsOne platform. I’ve run done I’d my longer runs with hills but haven’t really got into hiking much, or trashing my quads on the downhills.

Action: I have 4 months to get some decent hills in my legs and especially practice hiking up and running down steep hills. Butser Hill and Kingley Vale repeats need to feature heavily in my weekend training runs. My initial thoughts are to do BH/KV sessions once a fortnight with the other longer weekend runs including some sharp and technical climbs.

[Now this is a hill rep session! Kingley Vale is a great place to run hills]

Sometimes I’m okay running when it’s hot but yesterday I struggled at times. I stayed on top of my hydration, taking on enough water at each checkpoint to get me to the next one without running out. I doused myself in water at the checkpoints to keep cool, which worked well. I never overheated but could feel myself struggling at times, on the climbs in particular. I’m writing this rhe morning after the race with a splitting headache, so am most likely still dehydrated.

Action: Continue to be mindful of hydration. I ran the SDW100 on a very warm weekend in June 2015 and got it done. I also ran the NDW100 in August 2017, again in very easy conditions and with some tricky climbs. I didn’t finish that one but that was because I wasn’t sufficiently trained not because of the heat. Remember to continue to drink after the race, but not too much.

I resolved at the start of the race to run wherever it was flat or downhill. My commitment to this gradually ebbed away as the heat took its toll and my legs, having run no further than 17 miles in one go since last October, complained increasingly loudly in the second half of the race. At a few points in the race I quite literally had a word with myself and with a “Come on GC!” began to run again and kept running even when the devil was screaming at me to yield and walk “just for a bit”. At other times, I yielded.

Action: Finish reading The Chimp Paradox! I was most certainly paying too much attention to Gremlins in my thoughts yesterday and this affected my decisions and the outcome.

[Currently on loan from the Learning and Development library at work and being digested slowly. Lots of interesting stuff so far]

Action: Revisit past successes and how I overcame these demons to believe, keep going and achieve more than I’d ever thought possible once upon a time. See SDW100 blog and my comment above and the mile 50-60 of my NDW100 in 2017 plus the Facebook post from 2012 below about running 30 miles in 24 hours (2 x 15 mile runs, back to back) only 2 months after running my first marathon. 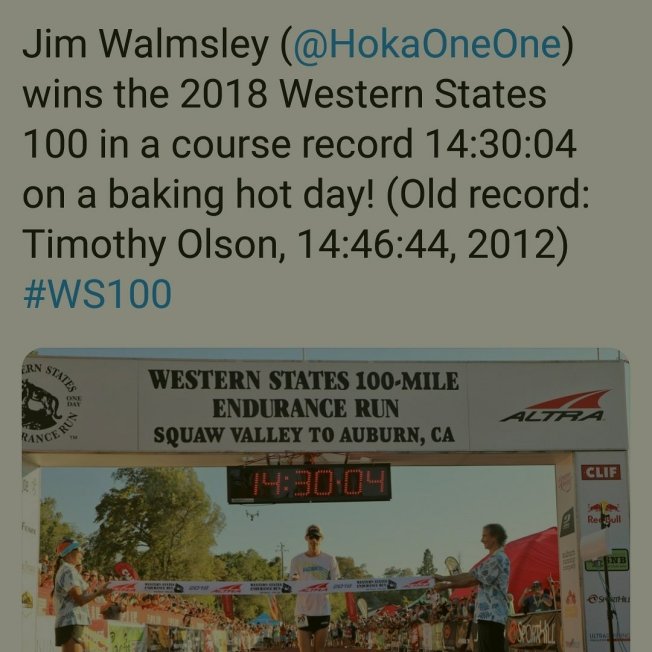 [This weekend Jim Walmsley broke the Western States 100 at the 3rd attempt. He was committed to breaking the course record and ran at record pace in 2016 (got lost 7 miles from the end) and 2017 (DNF due to nausea) and did it at last]

There was one point around 11 miles into the race where I and half a dozen other runners completely missed a sign and marking tape and added around half a mile to our race. Doh! I’m good at finding new ways to get to places in trail runs (AKA getting lost and somehow finding the way!) so this is no surprise. The fact was that the then we had to make was marked behind the gate we had to go through and we’d ploughed on ahead as it was out of our field of vision.

Action: Stay alert! Don’t blindly follow other runners and remember to look all around for signs and tape.

I’ve recently been experimenting with different nutrition on long runs and races. I tend to do a lot of my weekend long runs in a faster state and this has generally worked well as they are mostly at an easy (economy) pace. However, as I build towards WW50 I need to revisit eating during runs and retrain my visit to do so. Using the 33Shake pre/post run shakes has worked really well in my part two races, providing sustained energy for the first hour and a half. I was “fuelled” yesterday by 1 x Tribe bar (Peanut butter and banana) 1 x 33Shake gel, some watermelon, some pretzels, and in the later stages some Coke and an amazing peanut butter muffin. My energy levels were good but could have been better.

Action: Stay on top of nutrition during races and keep experimenting with different nutrition in training.

I had no specific time goal for the race. When asked for one the day before by a colleague I said I’d like to think of could finish in between 5 and 6 hours. I did. I’m happy.

At several points during yesterday’s race, particularly in the second half, I found myself doubting my ability to get back to running long distances at several points along the route. I then remembered to enjoy the journey and what I’ve previously achieved that I’d never have thought possible.

The Giants Head Marathon has given me lots of things to work on but also provided a great day out. Onwards.

Both worked fine. No blisters 👍

New purchase as my Run Breeze one has a year in it (still using it though!). Worked fine. Didn’t overheat 👍

Used on training runs. Perfect for this distance 👍

Today is the first Father’s Day since my Dad passed away at the end of June last year.

Today I celebrated the life of my Dad by doing a good deed (raising much needed funds for the Rainbow Centre) and getting a good workout in at the same time. Our fundraising page can be found here:

My cousin Louise Carter suggested that she, my brother Greg and I do a sporting challenge together just for fun late last year. We found the Rainbow Superhero Challenge, involving run, kayak and bike legs, and signed up as a team.

When we found out that the race was on Father’s Day we came up with the idea of doing it as Team Super Bob and I got some t-shirts printed. 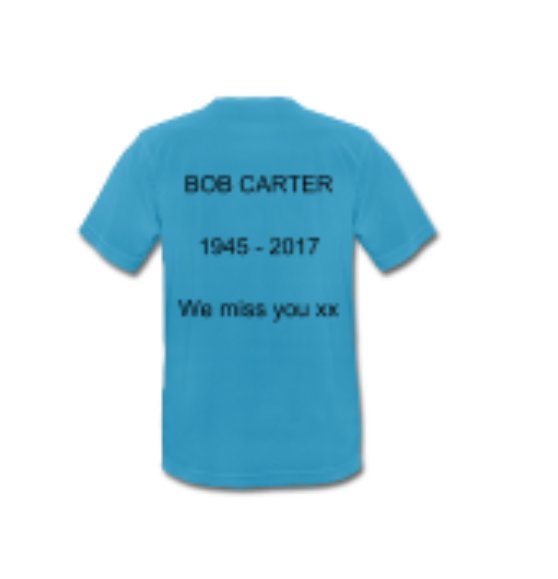 The plan was for each of us to do one of the three legs as a tag relay. Despite the fact that we’d missed the bit of the race rules that stated team members all had to do the 3 legs when we explained our reason for doing the challenge Rob Piggott, the race organiser, was happy to let us go ahead as planned. Phew!

My good buddy and fellow runner Phil Hall sent us a good luck message in the morning along with this motivational image, which made us chuckle. Love it Phil! 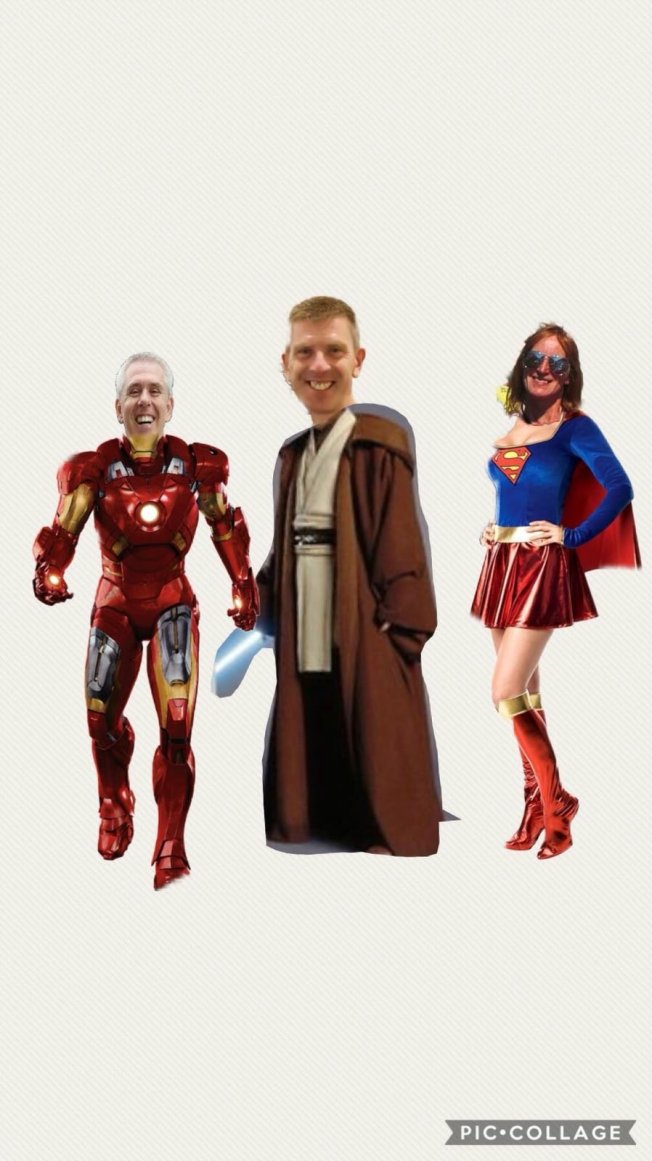 Anyhow, I started the challenge by running 3.5 miles from the Waterside Sports Centre in Portsmouth to the Hayling Island ferry, where Louise got in the kayak and paddled back to the sports centre before tagging Greg for the longest leg on the bike.

During the run leg I was happy that I managed just under 8:00min/mile pace, at least until I hit the muddy beach section, and pleased that it definitely felt more comfortable at that pace than it would have done at the start of the year. If I hadn’t been running back I’d have pushed harder but I wanted to save some energy for the return leg. My training using the TrainAsOne platform is definitely helping, with fitness building gradually. I certainly feel fitter and stronger than at any time since my London Marathon PB in April 2016.

Along the way we were each tasked with taking certain photos and collecting specific items to gain points. My tasks were to take photos of a bridge, a pub, a national flag, of both feet in water, and a selfie by the Lifeboat station. I managed all of these but Rob only gave half points for my feet in water effort despite my argument that no depth was specified and I did indeed have both feet in (about an inch of) water! 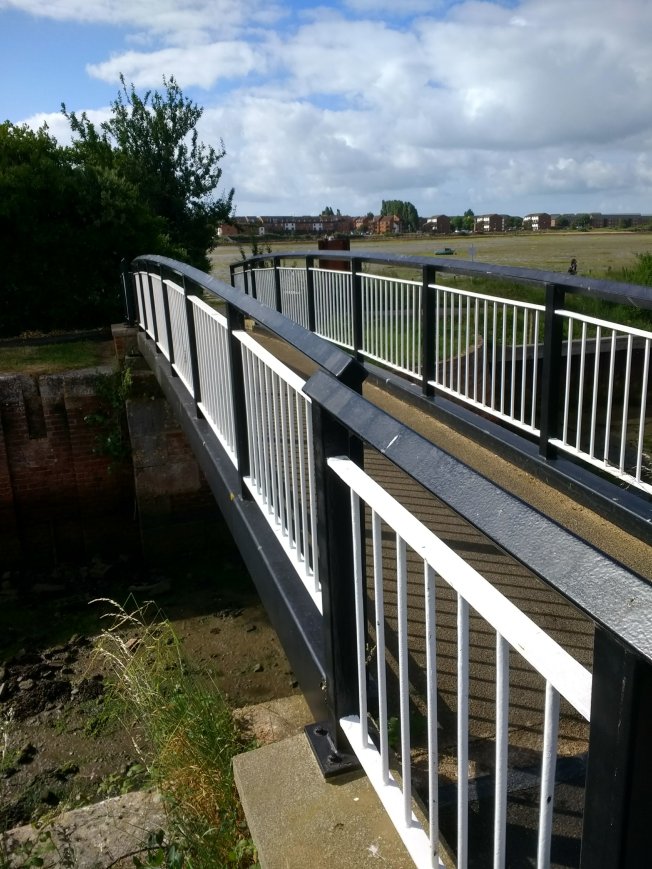 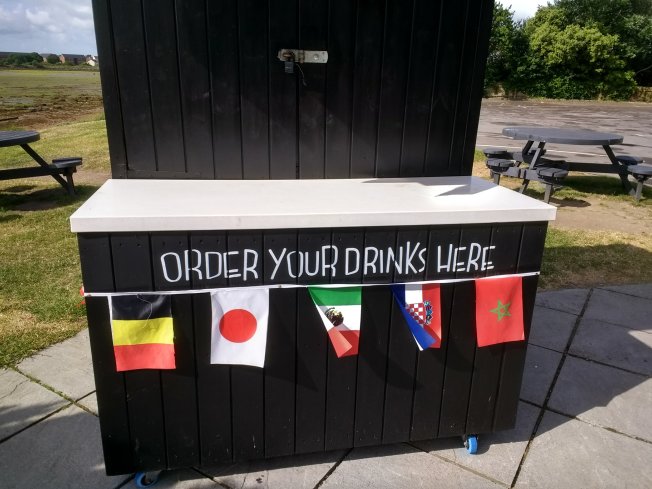 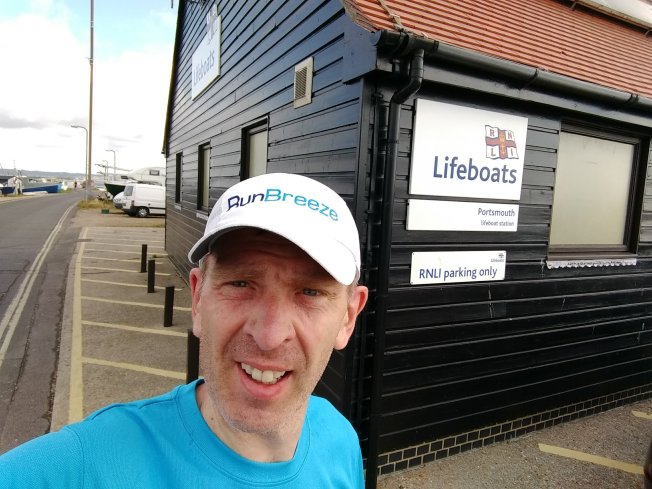 Having handed over to Louise, I then headed back to the start, much to the confusion of other adventure racers who running towards the kayak point and being passed in the opposite direction by another racer! An easy paced economy run back to the start took me 5 minutes longer than the first leg but left me feeling like I’d had a decent and varied workout. Much needed ahead of my first marathon since London 2016, the Giants Head Marathon in Dorset next Saturday. I’m preparing myself for lots of hills!

Greg set off on the bike leg just after I arrived back at the Waterside Sports Centre. He returned so that we finished just after the two hour mark. Challenge completed. 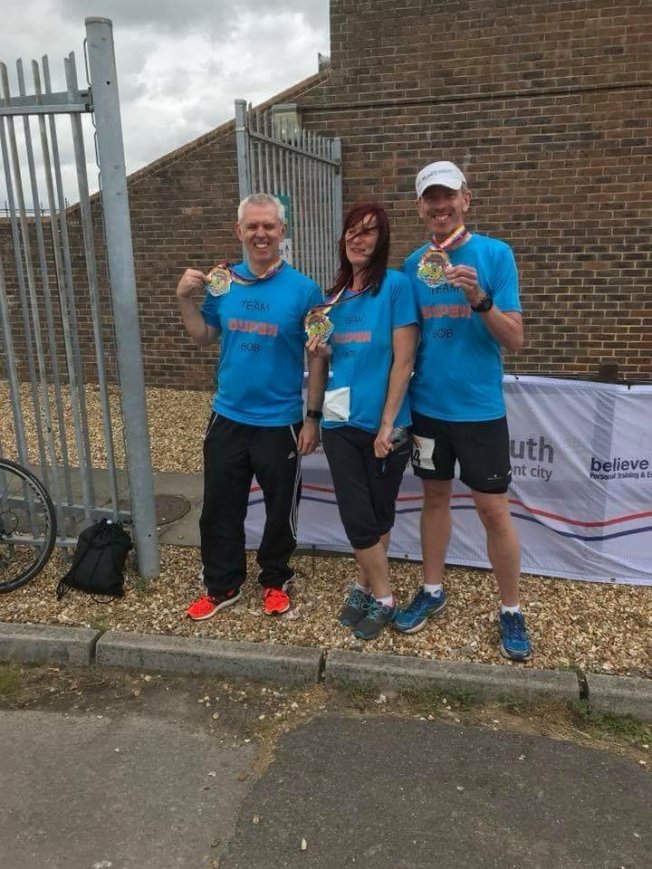 It was great to try something new and race with my brother and cousin. I think that Dad would have been proud of our efforts and I had a few years on the run and later as the reality of our first Father’s Day without him around hit home.

This was for you Dad. We all miss you so much and will keep making you proud xxxx 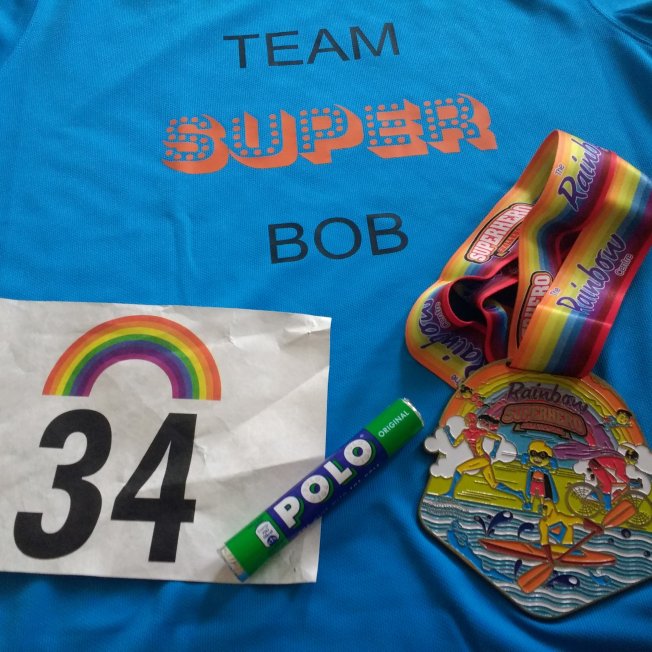